The Summer of Pickles

For the longest time, if you asked me about foods I didn't like, the answer would be pretty much the same:  pickles and mustard.  I ordered burgers ketchup-only for probably 35 years.

Then I discovered spicy mustard.  The problem with mustard wasn't mustard itself, but with the plain yellow mustard that you find everywhere.  Give me a Dijon, a brown, a whole-grain, something laced with generous amounts of horseradish--no, the problem wasn't really with mustard.

The jury's still out on pickles, but I'm running out of freezer space, and the garden's still going.  The tomatoes haven't even really started ripening.


To use up some of the extra zucchini, I went with Ball's "End of Garden Pickles" recipe (I've got Ball's Complete Book of Home Preserving to work with, besides Betty Crocker & Joy of Cooking).  It called for three cups of sliced zucchini, and three cups of green beans, and I didn't grow beans this year, so I was thinking - great, I'll use up these two big zucchini! 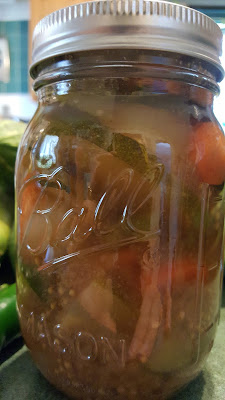 No, I used up one big zucchini.  So I've got three zucchini on my counter still, but five pints of mixed pickled vegetables - zucchini, carrots, onions, peppers.


These are the zesty variation of Ball's "Traditional Bread and Butter Pickles," peeled since I didn't plant pickling cucumbers this year.  Next year I may plant pickling ones again just so that they're easier to process when we're tired of eating them.

As you can see from the film on the jars, I forgot to add some vinegar to the canner when I processed the cucumber relish (from Ball's Blue Book).  This was not the pickle relish I was intending to make - I was just going to do the sweet pickle relish on the next page.  When I went to get started, this one was similar enough that I didn't notice the difference until I got to the "let stand 12 to 18 hours."  I've been skipping brined recipes for the most part since I want to do single-day projects.

I've got plenty of jam left - pineapple, jalapeno, cranberry, kiwi, apple butter - so I'm probably good there for a while.

These were still in the canner when I started this post -  six pints of sweet pickled cabbage.  I don't like sauerkraut, and my husband's had to cut back on his salt.

Once the tomatoes start ripening, I can process those either just straight up or as sauce.  I'm not sure what I'm going to do with the rest of the cucumbers and zucchini yet, but I've got a lot of recipes I can try.
Posted by Kate at 4:28 PM