I'm not sure how I got invited to the F&F alpha for Battle for Azeroth, but I'm going to try to be useful and not just run around mining.  This post will probably be super spoilery if you don't want to know anything about quests and whatnot, it's just going to be a running commentary as I run around Zanchul.

So, Marksman hunter, yes.  Of course.

Tranq shot is back!  I'm super excited about that for no real reason aside from Molten Core nostalgia.

Lone Wolf is currently nowhere to be found - and honestly, I like it better like this.  I miss raiding with a pet, and if this sticks, I'll be happy.  With the whole raid buff return, I'm really not surprised if it does stick - you'd have to put the raid buffs back into the Lone Wolf thing somehow, or have Marksman not bring the raid buffs the other two specs do, and that seems like a bad idea (in terms of the likely social pressures it would bring to play a different spec, not mechanically).

And one of the default starter pets for the alpha is that fire turtle that was such a pain to tame in Cataclysm.

Zul shows up early!  Looks like he's going to be a whole quest chain focus kind of thing.

There are orc peons all over, which just feels super Warcrafty.

Brutosaurs!  I squealed and made my husband come look. 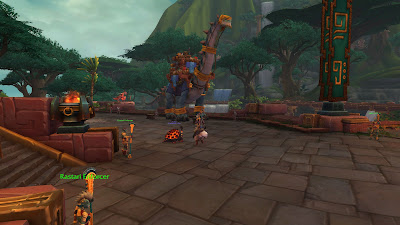 There's a handy test feedback mini window with both bug and confusion reporting, and feedback at the bottom of all the quests, which makes it easy for someone like me who isn't entirely sure how to be helpful for an alpha/beta.

So far I've gotten stuck in a wall once.

So Steady Shot is back, while moving, and OMG that druid NPC just turned into a triceratops.

Anyway, so far it looks like the only thing I can't do while moving is Aimed Shot.  There's Rapid Fire now, baseline, which looks like a single-target barrage.  All in all if this incarnation of Marksman makes it to live, I'm going to enjoy it.  (I mean, I've been playing Marksman since 2005 and just kind of rolling with the changes, but I was going to be really sad if I couldn't do solo stuff with my pet - that was probably the biggest potential change I didn't like.)  Aimed Shot has two charges - I'm not sure why, other than from making it too spammable with high haste, maybe?

Ooo, picking a loa.  This looks kind of like picking which building to build on the Broken Shore - each one gives a mobility bonus of some sort out in the Zandalar zones.

I kind of like this more centered main bars thing (default UI) even though it's going to take me a little while to get used to a new mouse position.

"Zandalar forever!"  Yeah, we know who's been watching which movie.

Ooo, trolls from other troll empires.

Anyway, that concludes day one of poking around in Zandalar... now I have to do actual weekend stuff, like laundry.
Posted by Kate at 5:04 PM